After one of the most expensive train journeys we’ve ever been on, we arrived in Quebec City at dusk. Taking one quick look at the almost vertical hill that Google Maps advised we climb with our 23kg++ backpacks we decided to Uber it to our AirBnB for the next two nights – not so backpackery, but hey it was 11pm and we were shattered.

The flat was lovely; a stylish and well kitted out duplex in Saint-Jean-Baptiste. Unfortunately, we had arrived on one of Quebec City’s few very hot days so the apartment’s thermometer was reading approx. 30C at night! Throwing open the wonderfully old wooden shutters revealed the old neighbourhood’s cobbled pavements, its name sake (the church itself) and a community garden.

We decided to make a quick dash for food on the ‘high street’. It being late on a Sunday, very little was open. However, despite this the area had a great vibe; gaggles of people, young and old, were out en force, frequenting the two open bars and the ever popular Erico and strolling the picturesque streets. We were lucky enough to find somewhere still serving food at nearly midnight, and settled down to a much needed cool beer – Coors no less (Jean Claude Van Damme came to mind) – and burgers. No culinary prizes for us!

After a good night’s sleep, we awoke in desperate need of a good coffee. A quick Google for third wave coffee later and we’re sipping rather delicious flat whites and munching on oh so buttery croissants in Cantook Micro Torréfaction. Heaven!

As we were in the neighbourhood, we also stopped by gourmet food store Épicerie J.A. Moisan. Around since 1871, entering this beautiful shop is like stepping back in time. There are wooden shelves stacked with every food item your heart could desire. Many products are imported from across the world, though they also stock a range of local delicacies and produce. 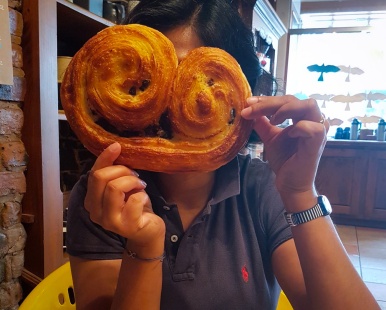 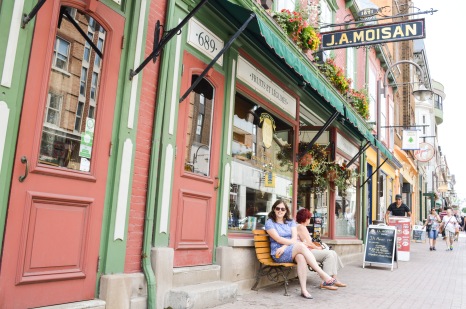 Two French fruit juices (all for Ali) later, we were on our way to Notre Dame de Quebec via the city’s old walls/ramparts. Although not a patch on its Parisian sibling, the church was free to enter so we were happy enough to seek refuge inside from the sun for a few minutes.

We continued our meander through the Haute-Ville – old Quebec is notionally split between haute (upper) and basse (lower) – and particularly enjoyed taking in Dali’s Elephante Spatial (a $3.6 million sculpture currently on display next to the UNESCO monument) and watching the street performers that Quebec City actively promotes before strolling along the boardwalk (the Terrasse Dufferin), picking up snippets of info about the city from the numerous tour guides leading groups of tourists along the waterfront. For example, we learned that the Chateau Frontenac is apparently the most photographed hotel in the world. Whether that’s true or not, it is visible from most of the Haute-Ville, so is a useful marker should one get temporarily lost meandering the area’s 19th century streets. 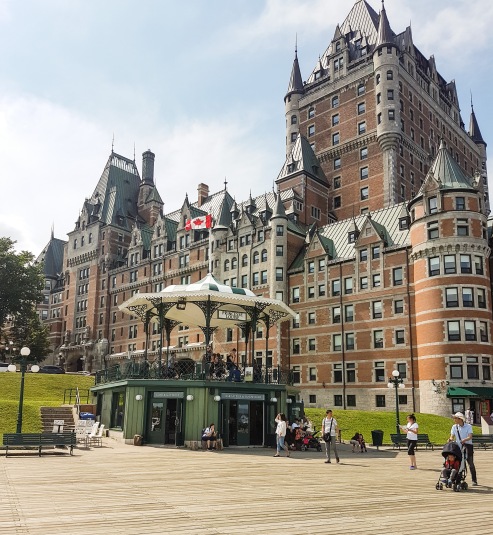 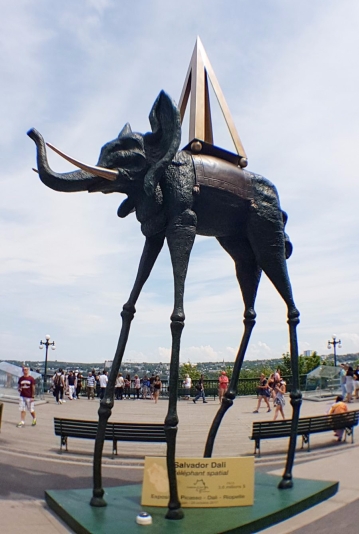 Walk complete, we had only one thing on our mind: poutine. For those of you without UK-based Canadian friends who reminisce about this on a regular basis, poutine is a quintessentially Canadian dish comprising skin on chips, gravy and cheese curds. We had heard that Le Chic-Shack – fabulous name – was known for this dish, so we dutifully joined the queue for a table. Although perfectly edible, it was nothing to write home about; perhaps it’s an acquired taste? What we did love was the lobster burger and salted caramel milkshake that we also quaffed down! 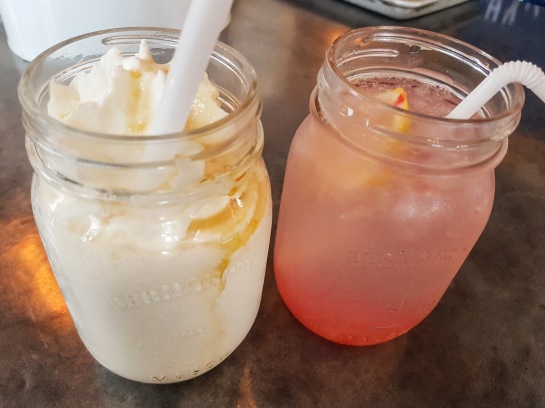 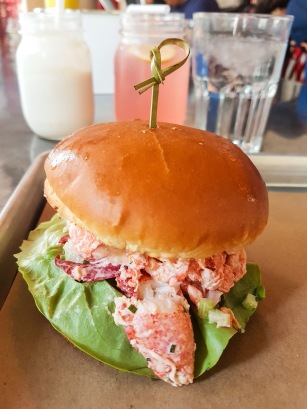 Shattered, we headed home via some more ramparts – Ali’s father would have had such fun walking around these old city walls, but alas we were too tired – and Tutto Gelato was beckoning. We also picked up some rather pricey goodies from the fancy grocery store with which to prepare a nice homecooked pasta supper. 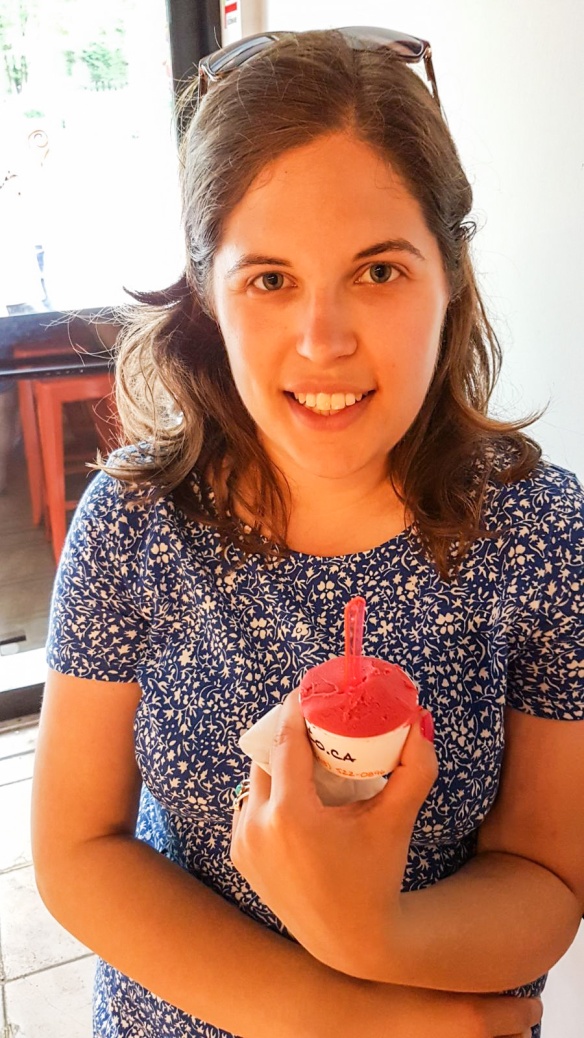 Another morning, another scrummy coffee from Cantook and more wonderfully calorific pastries (this time from Panetier Baluchon) to get us set for our first stop of the day: Parliament.

Given our previous success with visiting Canada’s parliaments, we were not holding out much hope. However, we were pleasantly surprised to find a) no queue at all, and b) an English tour starting in 5 minutes. The tour was fascinating for a politics degree holder (Ali) and a general knowledge buff (Sim). Perhaps unsurprisingly given its past under British rule, Quebec’s parliamentary structures and processes very closely mirror those of the UK. As in Westminster, there are two houses, a first past the post electoral system, and royal assent is required to pass all bills. Now, you may be asking yourself whether the Queen really signs off each and every bill (she is a very busy lady after all). In one word: no. Step forward the Governor General of Canada, an individual appointed by the Queen to represent her in Canada. Rather excitingly, the incumbent of this role is an ex-NASA astronaut by the name of Julie Payette. Girl power! 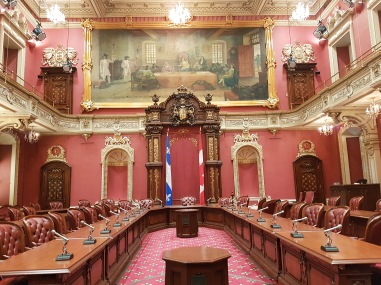 Culture done, we made a speedy stop at the station to check our bags – yes, that’s right, you have to check in your luggage on Canadian trains – before taking a walk along the harbour to take in some beautiful boats (there was a boating/ship festival on at the time). On the way, we passed a cat café (surely required café hygiene standards and cats don’t mix…), an artisanal savonnerie (soap shop), and some bizarre but interesting street installations including mirrored upturned dumpsters and a spinning tree! It turns out these pieces of art are part of an EXMURO project entitled the Passages Insolites (unusual passages) and seeks to disseminate multidisciplinary works in urban public spaces. 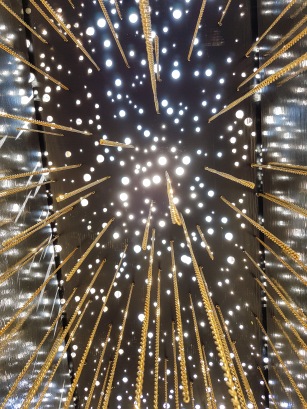 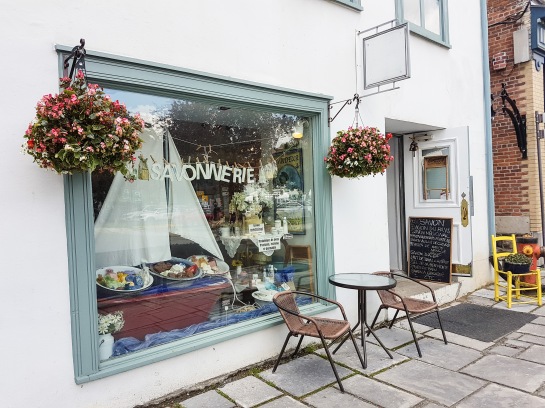 We eventually ended up in the centre of Basse-Ville, notable for more beautiful cobble streets, street performers, cafes, restaurants and a picturesque, though tourist-laden, square (Place Royale). Having read pretty good reviews, we decided to lunch at what Sim has coined the “stupid rabbit place” – also known as the Lapin Saute. Ali dutifully ate rabbit, but was underwhelmed, and Sim opted for a pasta dish that was swimming in oil but little else… 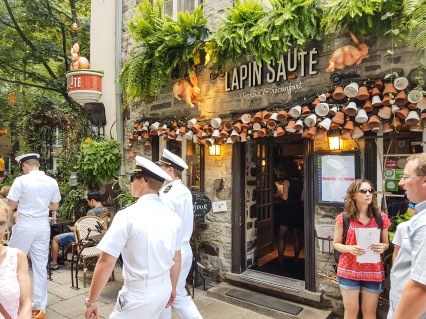 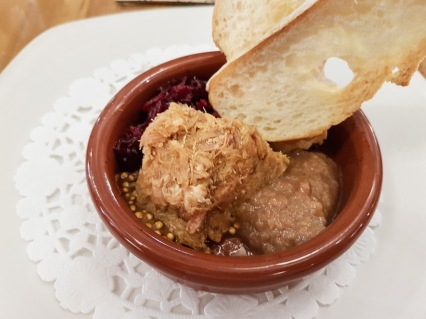 Feeling a little sorry for ourselves, we headed straight to Saint-Henri Micro-Torréfacteur for beautifully smooth flat whites and the most bizarre flavoured (though delicious) doughnut we’ve ever tasted: rosemary and grapefruit curd. 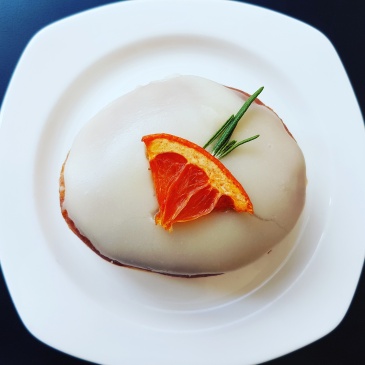 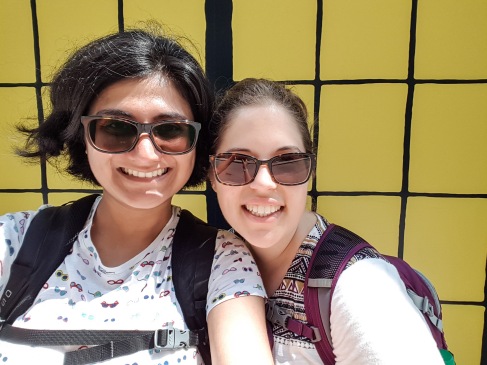 Munching done, we hopped aboard the trusty ViaRail bound for Montreal.